"The Bard" is the remake of an old RPG Maker I had going on a few years ago.

It was a story about a young, lazy boy who was expelled from his house for refusing to get a job. His only talent being being good with the sword, he decided to travel to the royal city to serve in the army, in the name of the king.

The theme of the game was coming of age, and indeed our hero would go through challenges and meet people he would help along his way. There was a comical tone to eveyrything in the world, and it was a go-anywhere, do-what-you-want kind of experience - the story was in the background, and you would enjoy your play time doing side-quests and finding more about the world. You could join clans and work as a miner, blacksmith, shop assistant. The main village of the game had different people walking around in the streets every time you exited and entered the map. There was a day/night cycle, and people had their own routine and everything. It was all made in RPG Maker VX Ace. Now I want to port it all and make it a 3D experience, with Unity 2017.

Right now, I'm still in the beginning of this journey. I have already coded stuff way beyond my (very) amateurish skills. I have a functional save/load game system that works between scenes and saves your inventory and quests! I have the combat, which I'm deeply satisfied =) I have the inventory (made with the help of Brackey's videos), and a quest log system I coded myself.

You can play a bit of the intro and fight with 4 different types of enemies: a bandit, a slime, a mushroom, and a thief! You can't complete any of the quests you receive. =) And the map is still a bit empty in some areas, but you can already do a lot of stuff, so if you want , download it, test it and give me your thoughts!

Most scripts by me. I used a footstep system from the Asset Store, but I think that was it!

Most 3D assets by me with a few exceptions (trees and some vegetation are not mine, some were made by Unkind Fox).

All characters modelled and textured by me.

Mixamo - All the animations (except for the slime and the mushroom) are from Adobe's Mixamo website.

Lots of SFX from Premiumbeats 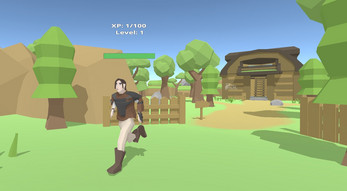